LGCM is turning 50 on September 20th and we’re celebrating the week of September 21st. We’re sharing memories from the past 50 years in a series of blog posts. This post is looking at 50 years of the Leahy family owning and working at Lake Geneva Country Meats. For more information about our 50th Anniversary celebrations, please click this link to visit our 50th Anniversary page.

When John and Rita Leahy started the business in 1965, they had three daughters, Michelle, Theresa and Kathy, and a fourth, Barb was soon to follow. John was an experienced butcher who grew up in the Lyons, WI area where he learned to cut meat after a stint in the Army during the Korean War. Rita was a schoolteacher from Mauston, WI who moved to the Lake Geneva area when she married John in 1957. Soon after the couple purchased the business, she would become a meat wrapper, bookkeeper, HR manager, receptionist and much more! Over their years of running the business together, John and Rita would travel around the country and world during their time running Lake Geneva Country Meats learning more about the meat industry, winning awards and making friends.

The four girls could tell you stories for ages about “growing up Leahy” that center around the Packing House, as Lake Geneva Country Meats is commonly called by the family. They’ll all tell you horror stories about making dog food, filling lard kettles and having to take cold sliced liver and wrap it in paper trays. For those horror stories, there were many more good times. They would get paid a penny box they made and they used that money for the Walworth Fair each year. They were able to travel around the country to meat conventions and enjoyed the ability to see new parts of the country. They all also loved the parties their parents would throw for employees during the Holiday season when everyone would get dressed up and go for dinner.

Michelle is the oldest and she was maybe the most valuable as a worker – so valuable that after getting fired three times in one day by her Dad, she still got rehired every time. Michelle was (and still is) one of the best meat wrappers the world has ever seen and remembers how she used to wrap 14 beef in one day. For comparison, we now usually do 8 beef in a day! She also listed one of her favorite jobs as when she got to mix the sausage seasonings by hand.

Theresa is maybe the smartest of the girls because she lead her Dad into believing she was a not very good wrapper. After seeing the results of her wrapping, John quickly moved “delicate” Theresa into the office where she was put in charge of balancing the books. Not only did her Dad bring her pieces of sausage and cheese, but she got her own personal space heater. It’s often debated, but on the basis of the evidence, Theresa was probably the favorite.

Kathy is the middle child and now runs the business on a daily basis, along with her husband Scott. She has very fond memories of the camaraderie shared with all of the employees while she was growing up. During deer season, we would work very late nights the three days before Thanksgiving. Her and her Mom, Rita, would make hamburgers for the staff and bring them over for everyone to enjoy as they were working. She says they were always a treat because hamburgers weren’t a mainstay of the 1970’s dinner plate.

Barb is the youngest and has many of the same memories as her older sisters but also shared some unique memories of her Dad. John was a very good runner and liked to use to race employees around the outside of the building. He was also very particular about which radio stations played in the business (a trait Kathy now shares!) and Barb loved changing the station when John was away. Barb even got to meet John and Rita in Germany to purchase a smokehouse while she was studying abroad in Europe in college.

John and Rita have 6 grandchildren and they have all worked in the business as they grew up. Kendra was a retail chick, in addition to doing all sort of little tasks as she grew up in and around the business. Nick started salting deer hides and then moved up to snipping brats. After years of perfecting how to snip brats, he has finally was promoted to Sales Manager. Abbey was given the dreaded task of traying liver and hasn’t been the same since. Caleb worked on all ends of production and was one of the most thorough clean up guys we’ve ever had in the business. Kiera and Chloe live in Texas and didn’t have as many opportunities to work at LGCM, but would help out at cookouts every summer they spent here. They also ran very successful lemonade sales outside the building.

John and Rita’s son-in-laws also play a prominent part in the business. Kathy’s husband Scott is now the President and CEO of the company and has played a major role in the recent growth of the company. Michelle’s husband Jim’s knowledge of how to fix almost anything is invaluable and he’s also a steady hand in our packaging room. Barb’s husband Mark is the guy we call when computers break and we don’t know what to do. He’s always available to help. Jim and Mark are also our go to grill out guys whenever we have a summer cookout at LGCM.

It’s been 50 short years for the Leahy family at LGCM and they’ve been filled with both joy and sorrow but no one in the family would trade their experience at the plant. Here’s to another 50 years of Leahys at LGCM!

More from 50 Years of LGCM 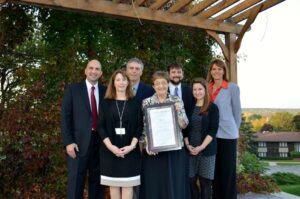 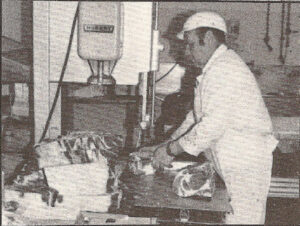