B is for Bacon! 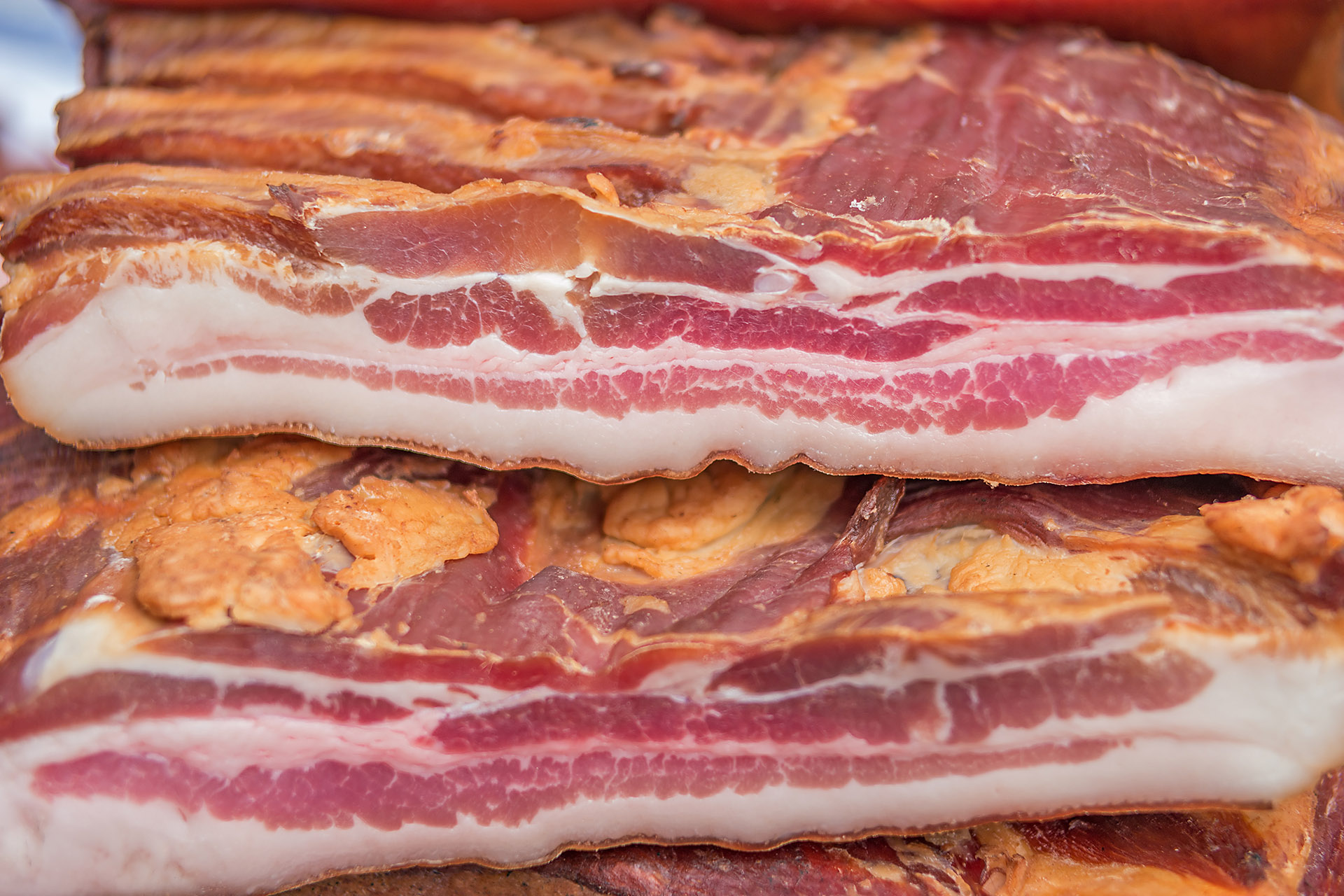 Bacon is a salt-cured and smoked pork product that can be made from various types of pork, but for the sake of this post, we’re going to talk just about belly bacon, the most common and popular type of bacon in America. There’s also back bacon, Canadian Bacon, and Cottage Bacon, but for this post, we’re going to focus on belly bacon – that is a cured pork product made from the belly of a pig.

Historically, before refrigeration was widely available, preserving meat to last without spoiling was of critical importance to protein hungry humans. Preserved foods helped humans explore new areas, survive winter or times of food shortages, and were an important trade commodity. The main method that was used to preserve meat was coating the meat with a high enough concentration of salts to help destroy or slow the growth of harmful microorganisms that cause the meat to spoil. This process was probably discovered by accident after a hunter found meat that had fallen into the sea and the salt water bath helped preserve the meat longer than they otherwise would have expected.

Today, there are both wet and dry curing methods of curing meat. Wet curing methods involve using a salt and water solution to have the salt solution penetrate the meat and start the preserving process. This is a faster process than dry curing and also helps keep the meat juicy and flavorful. Dry curing is done without any liquids – a salt mixture is just spread over the meat to slowly cure the meat. There is significant moisture loss during this process, which makes for a more intense flavor and dryer product when it is cured. For illustration, American deli hams are a wet cured product while prosciutto is a dry cured product.

Smoking also helps the preservation process, because the smoke forms a protective layer that helps stop microbial growth on the outside of the product. Since the smoke is only on the outside of the product, smoking needs to be combined with another preservative technique (like curing) to make a preserved food. Smoking also has the added benefit of adding delicious flavor the food!

Pork bellies are one of the most commonly cured and smoked items in the world. Pork bellies have a lot of fat in them, and aren’t a very tender cut of meat. This makes them prime candidates for smoking and curing, as this process helps tenderize the meat and adds salt and smoke flavor to offset the fat. Finally, when the belly is sliced into thin strips of bacon, it becomes more tender and easy to fry with all of the fat

Today’s bacon that you will find in American butcher shops and grocery stores is typically a wet cured product that has then been smoked. It is not a shelf stable product, but compared to plain pork belly, it has a significantly longer shelf life under refrigeration. You will find bacons that have been flavored either through a different brine, a unique type of smoke, or a rub on the outside of the pork belly. We truly love our bacon in America – the average American now eats about 18 pounds of bacon a year! 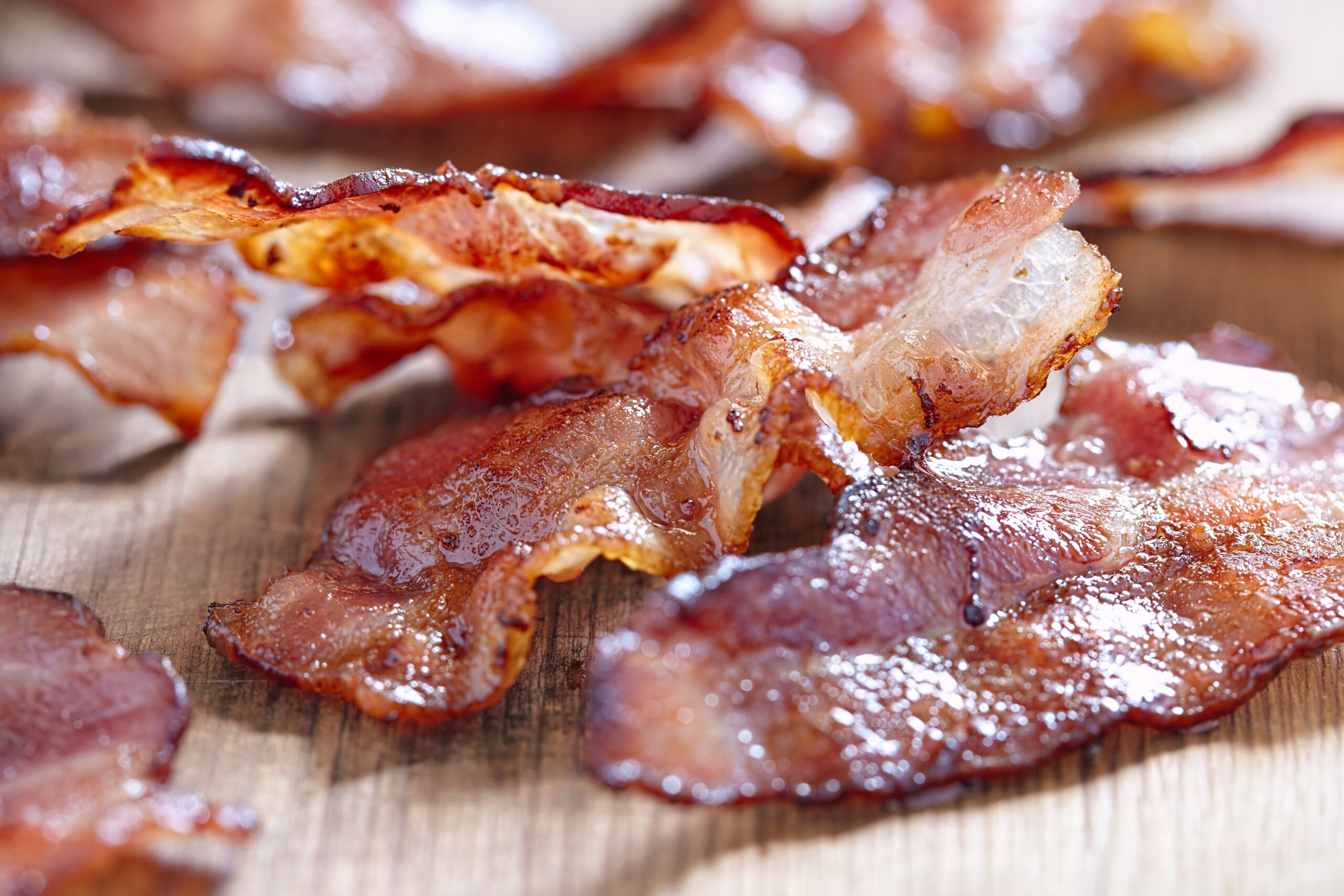 We are so proud of the quality of bacon we make here at Lake Geneva Country Meats. We start our bacon production process by being pretty picky about the pork bellies we use. We look for bellies that are flat and rectangular with moderate marbling. We don’t want overly fat or curved bellies that would lead to odd shapes or too much fat in your bacon slices. We then wet cure our bacon and send them through our smokehouse on a carefully calibrated program that we’ve developed over years of experience. After the bacon comes out of our smokehouse, we slice and package the bacon for you to enjoy at home!

Our Bacon has won many awards including:

We also make a very fun bacon t-shirt that you can wear with pride! You can purchase your “We Won’t Go Bacon Your Heart” shirt on our online store.

Other Types of Bacon

Finally, bacon can be made from other animals like deer, turkey, and more. These products are usually made from ground meat that is then seasoned, pressed into a belly shape, and then cured and smoked since these animals don’t have the same belly shape as pigs. 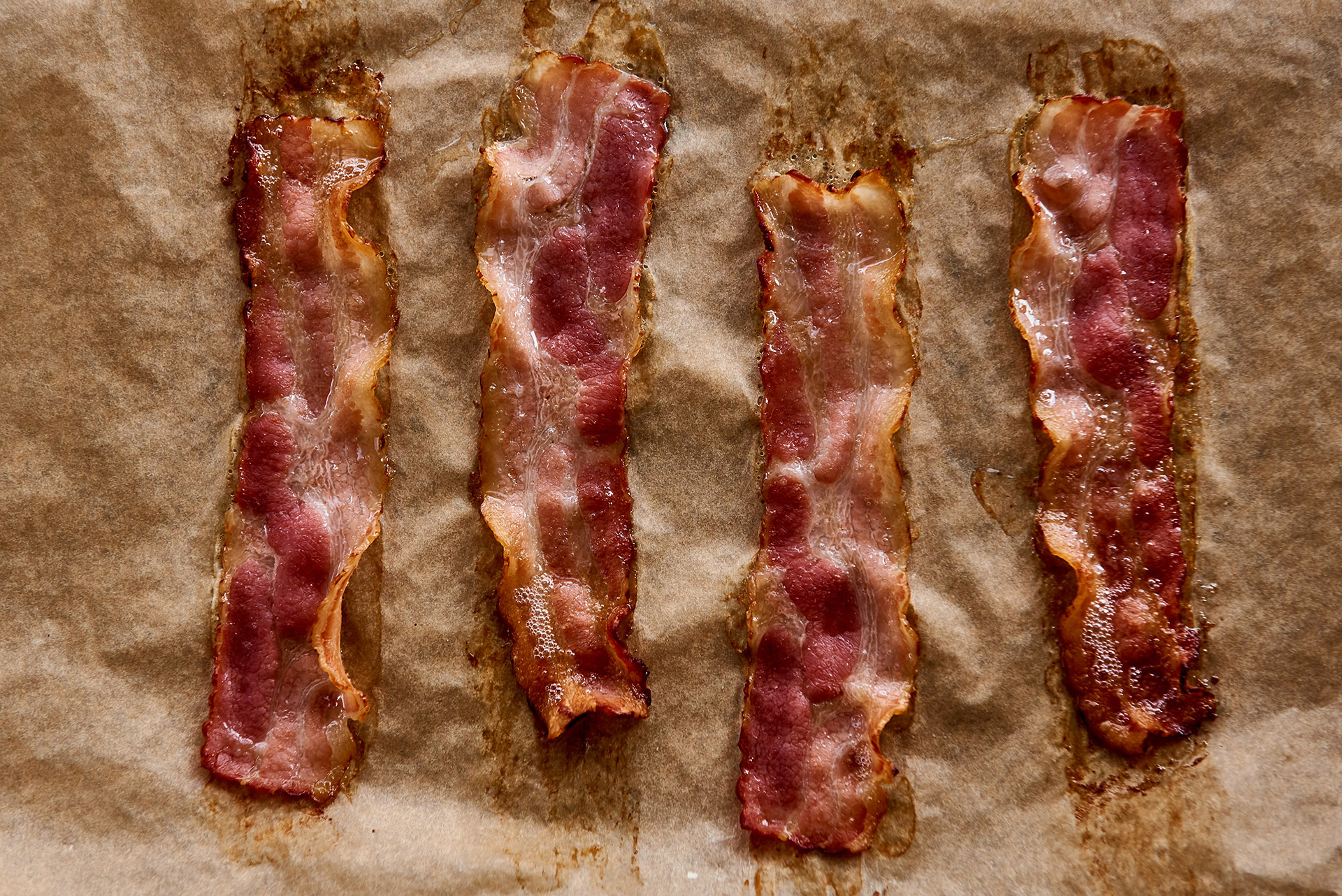 There are many different ways to cook bacon, but here are a few of our favorite ways to make bacon:

Don’t forget to save your bacon grease – there are so many wonderful uses for bacon grease. Check out this article on Bon Appetit that lists 15 Ways to Use Bacon Fat.

Give Me Some Bacon Recipes! 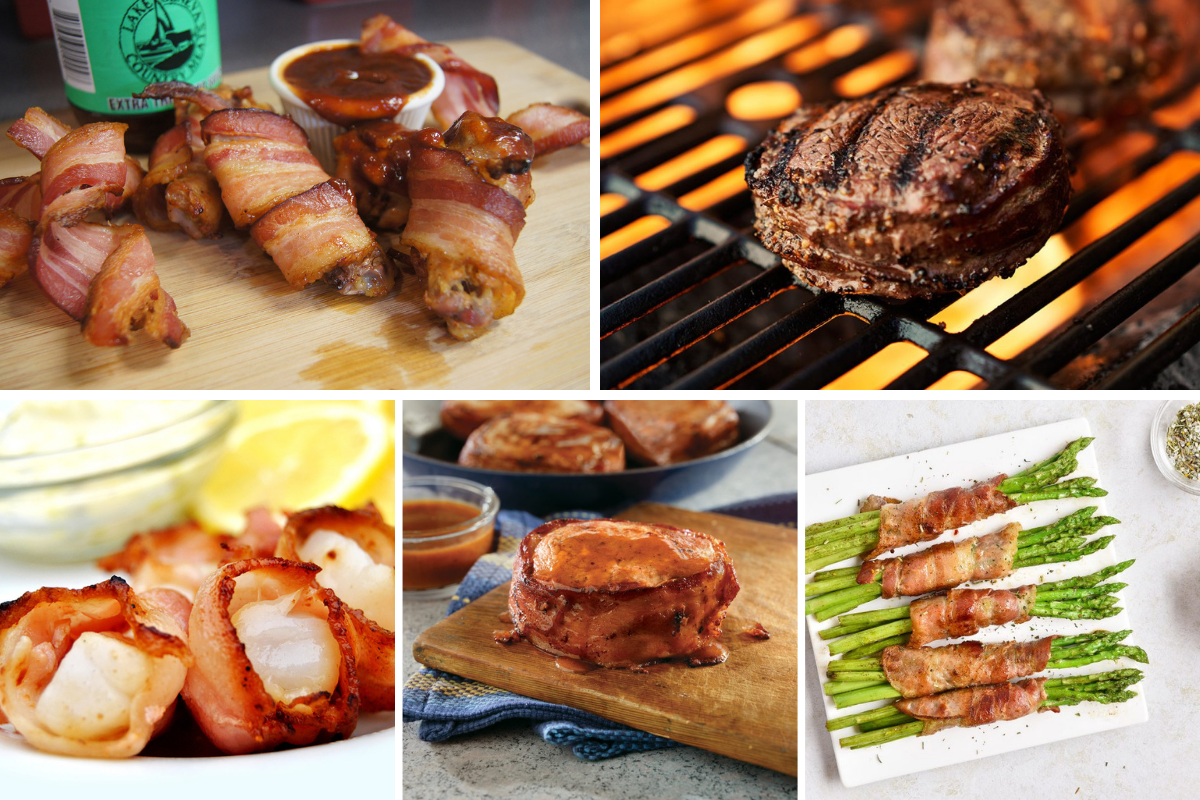 Bacon makes everything better – here are some of our favorite recipes for bacon. These recipes use bacon to wrap something else and make it much more tasty:

These recipes use bacon as an ingredient to add lots of flavor to the finished dish:

That wraps up our B is for Bacon post. We hope this post helped you learn more about our beloved bacon and gave you some new ideas on how to cook bacon or recipes to try that use bacon. Stop by Lake Geneva Country Meats and try our award winning bacon. We promise you won’t regret it!

Do you have questions about Bacon? Leave us a comment below and we’ll be happy to answer. If you want to keep deep diving into more meat topics, you can click here to see all the entries in our A to Z of Meat blog series!

More from A to Z of Meat 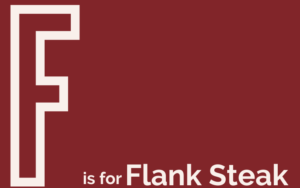 F is for Flank Steak 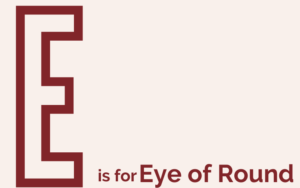 E is for Eye of Round Roast 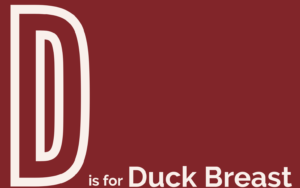 D is for Duck Breast | A to Z of Meat 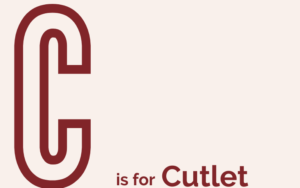 C is for Cutlet